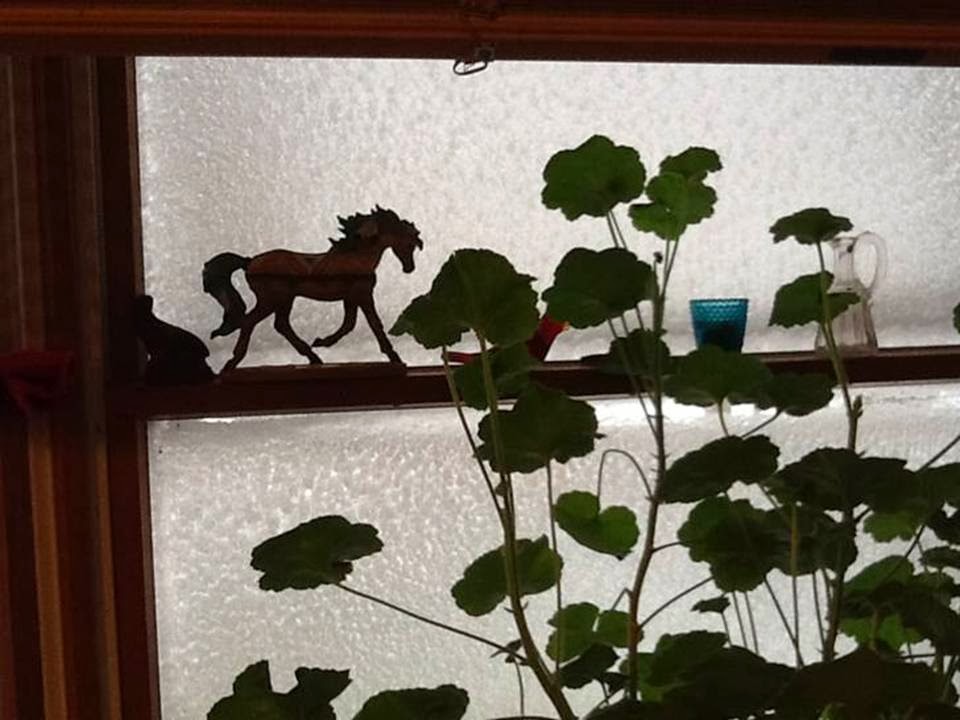 Although this little horse is a gift from New Mexico, he will always remind me of Cape Cod snowstorms, good friends and expectations.

In January 2013, after winning an international Irish poetry contest the previous year (the only American to enter) my friend Jacqueline Loring was on a New England poetry reading tour with Preston Hood and other friends. She was using my house as a home base because, after decades living and working on Cape Cod, she had recently packed up her house, computer, screenplays and other literary work, and moved with husband Gary to Albuquerque, NM.


No more boiled lobster and clam chowder for dinner, or moon tides and eel grass at the beach, or tall ships, tugboats, and tankers sailing through the Cape Cod Canal. As if someone waved a magic wand over her life, she, Gary, and daughters Revah and Kendra purchased a ranch, horses, saddles and bridles, were co-parenting a black newborn foal named Acheron and getting licensed to operate a therapeutic riding program called Enchanted Equine Adventures for military veterans and people with MS. Just like that.

But while she stayed with me a massive snow storm hit, no power, no heat, no stove for four days, house temp down to 37 degrees. We burned all my fireplace wood, most of the candles, and trudged across the street to Carol and Mickey McManus' house for brewed coffee, cooked food, and a warm room in which to have a glass of wine before returning to my polar cave.  As I recall, Jackie wore her Birkenstocks throughout the ordeal, but I could be wrong. Eventually, the power came back and roads were cleared. We loaded the car with plants I’d been minding for her, and she and Kendra set off for New Mexico, dodging winter storms all along the way. Gary was at the end of the driveway waiting when they finally got home.

It’s a year later.  In early January 2014 the Cape is clobbered with another snowstorm, 12" of snow with 50 mph winds and sub-freezing temperatures. Anticipating a power outage as usual, I brought in wood, put salt and shovels by the front door, cooked a chicken, got out candles, and checked on the hospitality of Carol and Mickey who have a gas stove.  As I’m putting wind stoppers on window sills and doorways, I spot Jackie’s hostess gift last year, a little painted horse popular in New Mexico. I think to myself: look at that attitude, head high, striking out for whatever’s ahead, not unlike the gift-giver herself, prancing off to some new adventure.

I move the little horse from a low table over to a snow-encrusted window ledge in my kitchen, a reminder that I too set off expectantly into this new year, in search of whatever new experiences and good fortune await me on the pathway of my life. The little horse will also reminds me that  snow melts, but true friendship always remains.
Posted by Christie Palmer Lowrance at 8:52 PM 6 comments: